I am working through plotting issues myself and returned to these notes from a master class I taught on narrative endings a couple years ago. They are just my notes, which may or may not be helpful to anyone who did not attend the lecture. With that caveat, I’m bumping them up for others to more easily find them (and to more easily find them myself!):

PADDLING YOUR BATHTUB INTO LONDON:
HOW GREAT STORIES END

“Writing a novel is like paddling from Boston to London in a bathtub. Sometimes the damn tub sinks. It’s a wonder most of them don’t.” – Stephen King

The 3 Rules for Ending any Narrative Work

Rule #1 Give the reader what they want, but not in the way they expect it. “SURPRISE”

Rule #2 Do it Slantwise, which means  you have to start paving the Yellow Brick Road at the beginning. “INEVITABLE”

Seriously, this is what you are going for. Sometimes it’s called the “inevitable surprise.” I think Aristotle’s phrase was “inevitable and unexpected” but I suppose that depends on who is translating.

Plot is “a system of compulsions to the end … leading to the final breakthrough, when meaning is revealed and emotion felt.” – Oakley Hall, from The Art and Craft of Novel Writing

FREITAG PYRAMID is the classical structure: 3-acts built on two reversals (can be 5, or more) 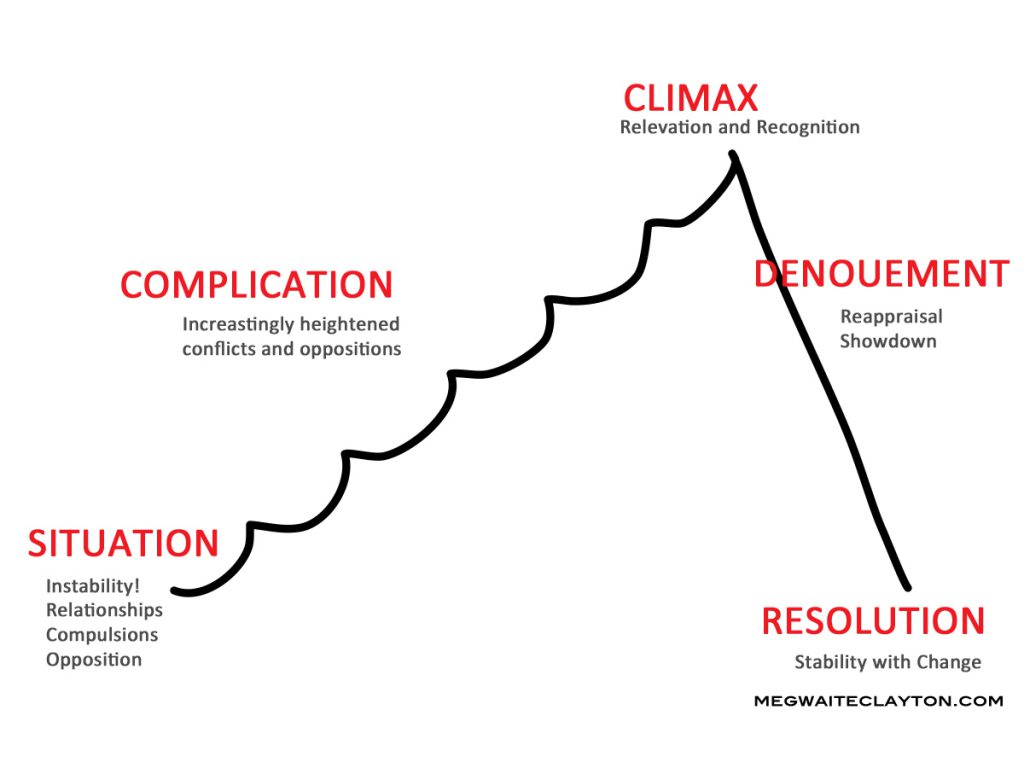 Rule of thumb on Beginnings

Start as Close to the End as you possibly can, and in a moment of instability. Aristotle says begin “in the middle of things.” A good place to start is often at the moment an unsustainable situation receives the last straw. If you need moments from lives before that, you can backfill after the story is going. But don’t start too close to the end or it will look gimmicky.

Ways you keep the compulsion going (and the reader) include

Fiction is a process of change — which comes with discovery or recognition:

The Most Important Elements of an Ending, a bit more specifically than Rule #1

Meg Waite Clayton is a New York Times bestselling author of seven novels, most recently the National Jewish Book Award finalist and international bestseller The Last Train to London. Her prior novels include Beautiful Exiles. Her prior novels include the Langum-Prize honored The Race for Paris; The Language of Light, a finalist for the Bellwether Prize for Socially Engaged Fiction (now the PEN/Bellwether); and The Wednesday Sisters, one of Entertainment Weekly’s 25 Essential Best Friend Novels of all time. She has also written for the Los Angeles Times, The New York Times, The Washington Post, the San Francisco Chronicle, Forbes, and public radio, often on the subject of the particular challenges women face.